Those of you that we have as an acquaintance on Facebook might know that we had a small “competition” for our nearby friends. For those of you that weren’t aware, the deal was as follows: anyone who saw the message and had any sort of design skills he wanted to show, would propose an idea/sketch of what they envisioned as our logo, the winner would get a 18-19 L batch of whatever beer they wanted made. Now, we didn’t just ask people to come up with whatever came to mind, we had a concept idea behind. Our original idea in naming our home brewery was in relation to Aztec mythology, in particular the Aztec god Ometochtli which translates as “Two Hare/Two Rabbit”. This god was the leader of the Centzon Totochtin a.k.a the 400 rabbit/hare gods of drunkenness and debauchery. This explains the Hare in the name, but not the snow. The Snow part comes from the fact that while I’m Mexican, my better half is Finnish, and “snow hare” is another name for one of the typical hares they have in Finland. So after much debating and brainstorming we decided on Snow Hare Brewing.

On to the juicy part…

We received a total of 4 submissions (+1 in joking manner, so it wasn’t considered). The people behind the designs were: Gina, Antti, Ville and Mika. We’ll go one by one (or more since some submitted more than one option). I’ll go in the order listed above.

These designs were cool because they’re easy to imagine as beer labels. Similarly, the follow quite strongly the reference to Aztec mythology as it is quite obvious.

This one we thought to be “sexy”, I mean, just look at the hare! Antti was planning on polishing the design more, but he didn’t have time to propose anything else.

All three of Ville’s designs are really cool. We particularly liked the font he used and the general idea behind the logos, since they represented the idea we had very well. Design #3 was particularly spot on!

There were a few other variations on this one, mostly playing with the expression of the hare, we settled for this smirking/drunk hare. It’s the funnest design of all.

And the winner is…

So, now that you’ve seen all the designs you might have a particular one you liked. But the one we liked the most and the winner of our little competition is Ville’s design #3. Here it is again, a bit bigger. 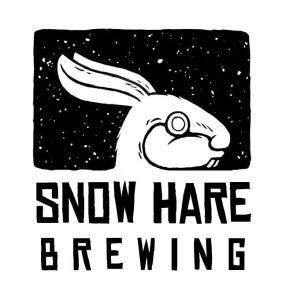 We’re not sure if you all agree, but we really liked this design and we are discussing possible changes/improvements. So this is not the final final version, but it gives an idea of where it is going. It’s a very cool post-modern Aztec hare.

The prize beer is still under discussion, but it will most likely be some sort of Pale Ale or Brown Ale. The idea is to discuss the potential recipe with Ville and come up with something that he will be fond of.

Once the final version of the logo is ready we’ll post about it. You can also expect to see a format change in the blog. Till next time!

In line with the previous post, and despite having mentioned the taste a bit in the recipe post I’ll go over briefly the ESB Batch#7 tasting notes. Here it is: 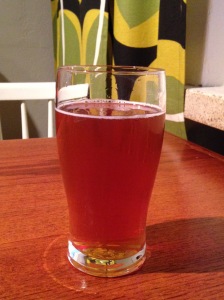 Just as last time I’ll separate the evaluation into sections. I’m probably gonna get some input from Anni on this since she likes the style more than I do and will probably provide a better explanation of it.

The color came out clearer than last time, I bit less SRMs and much much cleaner than the previous. Here’s a side by side:

Granted there is a difference in lighting you can see both that the beer is cleaner and clearer. Overall we’re quite pleased with the color.

The carbonation level came out ok, but on this case it had practically no head. This is not very consistent though, other bottles have had better carbonation than this one in particular. Since it has no head, no need to speak about retention. The overall feeling of carbonation is good though, and it fits the style, so no complaints.

In the previous post of our E.S.B Batch# 1 I wrote:

I pretty much feel the same this time. Except that there is no yeasty smell, the beer is much cleaner and crisper, but the general feeling, “grapefruitiness” is pretty much the same, hops are slightly more perceptible and there is a slight malty smell to it. Overall a good improvement.

It’s supposed to be an ESB and it tastes like one. I bit to much grapefruit if you ask me, but the taste is good. Slightly malty, distinctive diacetyl as expected in the style. Fresh and crisp, the taste varies depending on how long its left in cooling, longer is better.

Even if the beer is good and fits the style, it doesn’t mean you’ll love the beer. But other people might. This is not my favourite, but I think its because I’m not that partial to this style of beer anymore. I think trying out the same recipe with a more traditional british yeast would be interesting. Similarly, it would be interesting to make a stout with the irish yeast to see how it behaves. I don’t think I’m very fond of how it tastes in ESB’s. Granted, everyone else has a better opinion of this beer than me.

This E.S.B is a remake of the of the first recipe we made. The original intention of this batch, was to make it for a wedding. We had given out some of our beer and ESB was the one that was liked the most. So, we decided to make a double batch. By this point we had two pots, the electric one we made and the normal pot+inductive stove one.

For all intents and purposes the process was the same, we just had one batch running in the bathroom, and another in the kitchen. The reason for this is the electricity breaker limit of 10A. Since the bathroom has a separate 16A breaker for the washing machine, this was the only option. I’ll go through the recipe as usual since it wasn’t exactly the same as our first beer and then I’ll elaborate a bit on the process differences.

Since we a pre-final version of our “automated” system (again, more on this later), we decided to try a step mash. Here are the steps:

Since it was easier to mash with our electric pot, both batches were mashed in the same pot, but boiled separately. In order to make both batches taste as much the same as possible they were blended together half and half on different fermenters. Pre-boiled, pre-cooled water was added to make both batches 19-20L. Measured gravities were as follows:

For some reason after fermentation one batch came out cloudier than the other, perhaps the difference in the boil had something to do with it as the electric pot boils better than the one on the inductive stove. Other than that, taste came out pretty much the same on both batches. Unfortunately, the wedding was cancelled and we still have some left. Considering this batch was brewed in June, the beers have lasted quite a bit.

This batch was interesting due to the amount brewed and the differences in them. While the flavour of the beer was mostly the same on both batches some difference could be tasted. I attribute this to the different geometry of the fermenters, as I’ve read that this might affect fermentation. But who knows. It might have been a good idea to blend the batches post fermentation, and not just pre-fermentation. Either way the beer came out well. Not my favourite, but everyone else liked it, so that’s good enough for me 🙂

First of all, an apology for not keeping this up to date, its been a busy year, we’ve had holidays, and our schedules just don’t always allow to write about all we’ve done. You can expect more frequent updates from now on, at least that’s our aim.

Second, when we started this blog we thought to use it as a way to document our homebrewing adventures. And to be honest that intention is still the same, but we’ve been a bit more active than I thought we’d be (and a bit more busy). Our last post was referring to Batch #6. At the moment of writing this it’s been 2 weeks since we finished Batch #13. That’s 13 batches in less than a year, some might think this is not much, but I feel its a considerable amount for the first year of getting into this. At the same time, we’ve been giving beers left and right and when people ask (or tell) about us, saying “We’re R&A brewing” sounds kinda lame and generic. In order to have a more distinctive name we decided to rename our blog and our ‘brewery’ if you will. As such.

To close this post I’ll leave you with a list of the batches we’ve yet to write about so you have an idea of what to expect.

You can expect to read about these batches in the coming weeks.