In line with the previous post, and despite having mentioned the taste a bit in the recipe post I’ll go over briefly the ESB Batch#7 tasting notes. Here it is:

Just as last time I’ll separate the evaluation into sections. I’m probably gonna get some input from Anni on this since she likes the style more than I do and will probably provide a better explanation of it.

The color came out clearer than last time, I bit less SRMs and much much cleaner than the previous. Here’s a side by side: 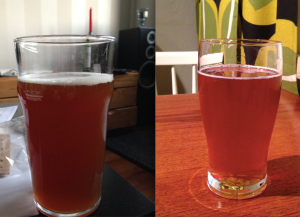 Granted there is a difference in lighting you can see both that the beer is cleaner and clearer. Overall we’re quite pleased with the color.

The carbonation level came out ok, but on this case it had practically no head. This is not very consistent though, other bottles have had better carbonation than this one in particular. Since it has no head, no need to speak about retention. The overall feeling of carbonation is good though, and it fits the style, so no complaints.

In the previous post of our E.S.B Batch# 1 I wrote:

I pretty much feel the same this time. Except that there is no yeasty smell, the beer is much cleaner and crisper, but the general feeling, “grapefruitiness” is pretty much the same, hops are slightly more perceptible and there is a slight malty smell to it. Overall a good improvement.

It’s supposed to be an ESB and it tastes like one. I bit to much grapefruit if you ask me, but the taste is good. Slightly malty, distinctive diacetyl as expected in the style. Fresh and crisp, the taste varies depending on how long its left in cooling, longer is better.

Even if the beer is good and fits the style, it doesn’t mean you’ll love the beer. But other people might. This is not my favourite, but I think its because I’m not that partial to this style of beer anymore. I think trying out the same recipe with a more traditional british yeast would be interesting. Similarly, it would be interesting to make a stout with the irish yeast to see how it behaves. I don’t think I’m very fond of how it tastes in ESB’s. Granted, everyone else has a better opinion of this beer than me.