We had our first beer for the first time 1 week after bottling, and at that point it tasted really funky and green… I feared the worst! but after another week and then a bit more it got to be pretty good… ladies and gentlemen, Batch #1 E.S.B: 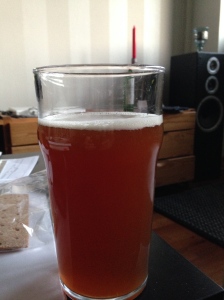 So!, I’m not a professional taster or anything, so I’ll just give you my general impressions on the beer and hopefully that will be enough. The final ABV content was theoretically 5.2ish%, but everyone who’s tried it thinks it has more as it gets you a tinsy bit tipsy after only a pint.

I’ll divide the comments into sections to make it clearer.

The color came out quite nicely I think. This redish/orange which is nice to the eye. If anything I’d say it’s a bit too darkish, but overall its a pleasing color. The beer is quite hazy, but this is expected because we didn’t have a wort chiller at the time and we didn’t use any irish moss. It doesn’t really affect the outlook though.

The carbonation level came out quite good, it keeps a nice fresh bubbling for the duration of the drink. The only think lacking was the head. It has a nice thin foamy head but disappears quite quickly. But I guess that also kinda goes with the beer style, so its no big deal.

The taste is where this beer didn’t disappoint. Its really bitter but not overwhelming, the body is heavy and lightly sweet giving a satisfying (if a bit overly filling) feeling. The hop bitterness really comes across and while it has a slight taste of the trademark yeasty homemade beer taste the beer is pretty damn good!…. for a first try. 🙂

So, if I had to say anything about this first all grain brewing experience and the end result I’d say I’m quite satisfied. This definitely surpassed by previous malt extract brewing and unlike extract brewing I learned a LOT during the process. Based on my limited knowledge and experience the things I’d do to improve this same recipe would be:

But yeah, all in all I’d say this beer is a success. It might not be a beer you can drink more than 1 or 2 of, but its definitely enjoyable.